We facilitated two workshops in November with the goal to introduce participants into Simple Knowledge Organization System (SKOS) by hands-on learning how to publish a small vocabulary with SkoHub Vocabs. The first one “Eine Einführung in SKOS mit SkoHub Vocabs” was held as a cooperation between the Hochschulbibliothekszentrum NRW and the Göttingen eResearch Alliance with 14 German-speaking participants on 2021-11-02, see the workshop pad and the slides.

As the workshop worked quite well, we applied the same approach to our Workshop “An Introduction to SKOS with SkoHub-Vocabs” on 2021-11-30 at SWIB21 (slides) with around 20 participants. 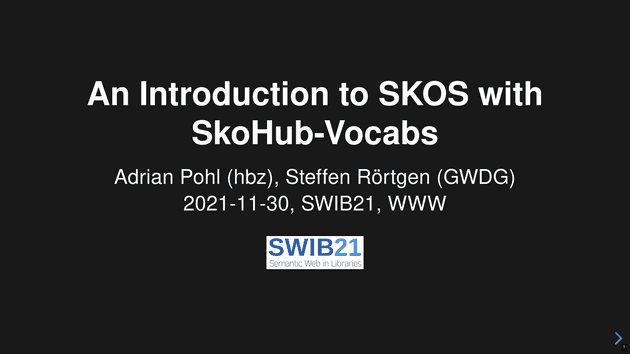 Generally, we had the impression that participants of both workshops where having a good time, at least nobody left the conference room before the end of the workshop. Here are some notes and lessons learned we collected after the SWIB workshop:

With regard to the further development of SkoHub Vocabs, it became clear during the workshops that it would be great to have an automatic test with each commit that lets you know whether a SKOS/Turtle file in a repo is “SkoHub-ready”, i.e. conforms to the pattern that is supported by SkoHub Vocabs. Issue #91 is already addressing this need and should be worked on to accomplish this.